Why I Hate NSAID’s (And You Should Too)

Long-term use of Nonsteroidal anti-inflammatory drugs (NSAIDs) carries the risk of significant side-effects, including but not limited to increased risk of bleeding and ulcers of the stomach lining, kidney failure, liver damage, and increased risk for stroke and heart attack associated with these types of medicine.

Multiple studies and clinical trials reveal that although these drugs may provide short-term pain relief after an injury, there is little to no evidence of a positive effect on long-term healing. In fact, there is conflicting evidence in studies in animals regarding the effect of NSAIDs, with some data suggesting that NSAIDs may actually prevent healing.

Many patients who develop an orthopedic injury have problems with their tendons. Since tendon disorders often arise from a slow process of degeneration, rather than an inflammatory cause, a drug designed to reduce inflammation has little effect on the real underlying problem.

Instead of trying to reduce inflammation, a better goal can often be stimulating the body's own signals for recovery by using either prolotherapy, PRP (platelet rich plasma), or BMAC (bone marrow aspirate concentrate). We call this group of therapies: Orthobiologics, and for this reason, we try to avoid the use of NSAID’s before and after such procedures, which could otherwise blunt the healing response.

How Georgia Bone & Joint Can Help

For an in-depth consultation to find out if cell-based treatments are right for you, consider booking online or call 770-502-2175. 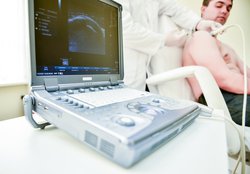 What Is Guided Ultrasound?

Thank you for subscribing!

You will receive important news and updates from our practice directly to your inbox.